Ray tracers are ‘interesting’ in that they end up doing a fairly similar set of computations—intersect, shade, sample, repeat—over billions of individual rays. (Apparently it was 13,486,203,269,559,350 rays to render Lego Batman—otherwise known as 13 million billion of them.) When rendering a scene, more or less the same code runs for each of those rays and accesses the same scene representation, just starting out with a different initial ray. Every once in a while, code that previously worked flawlessly for billions of rays before it will fail in a surprising way.

A fun example: a while ago at Google, someone was running a lot of jobs rendering with pbrt to generate some synthetic data. One of the jobs never finished; it turned out that the renderer was stuck in an infinite loop. I started digging in and found that it was stuck in a root-finding routine; this was surprising, since the algorithm used there had been carefully chosen to always make forward progress. It’d never been any trouble before.

That routine uses Newton-bisection to find the zero of a function. It maintains an interval that is known to bracket the zero and then works on refining the interval until it’s small enough. It first tries to take a Newton step, using the function’s derivative to estimate the position of the zero. If that leads to a point that’s inside the interval, it uses that as an improved interval endpoint. Otherwise it bisects the interval. This approach ensures that the interval gets smaller with each iteration. 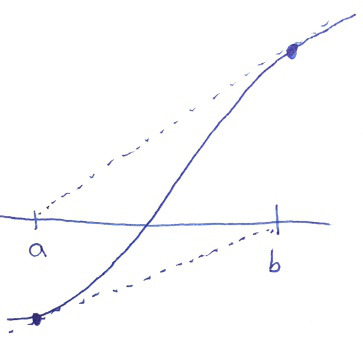 The problem was that given an interval \([a,b]\) and a proposed new \(t\) value from the Newton step, the check for whether to bisect instead was written like:

In this particular case, this code accepted the Newton step at each end and ended up endlessly jumping between the two endpoints. Good times. The fix was simple—bisect unless the new endpoint is strictly inside the interval:

When that check was first written, it was completely unimaginable that the interval and the derivatives would ever line in the way they did for that one run; what are the odds of that? But if you trace enough rays, then even these unimaginable things start happening now and again.

These sorts of rare-but-legitimate happenings can make it hard to write good assertions in a ray tracer; things that you’d like to say will never happen sometimes do, legitimately. That’s unfortunate, since assertions can be a big help when writing software; when they fail, a fundamental assumption has been violated, and you know something needs to be fixed. (John Regehr has a nice blog post on assertions that’s worth reading.)

Here’s an example of this challenge from a experimental branch of pbrt I’m hacking around in: the following few lines of code call a Refract() function that computes a refracted ray direction using Snell’s law. It returns a Boolean value that indicates whether total internal reflection has occurred.

As it turns out, this code is called after the Fresnel reflectance has been computed for the surface and is only called if some light has been found to be refracted as per the Fresnel equations. Thus, in principle, total internal reflection should never occur here: we’ve already implicitly tested for that case.

However, if we assert that tir is false, we’ll quickly find out that theory and practice don’t always match up. The issue is that the math that Refract() uses to check for whether total internal reflection has happened is slightly different than the math in the Fresnel equations. As such, rarely, they’ll come to inconsistent answers due to floating-point round-off error.1 Therefore, we need to handle the total internal reflection case here when it occurs:

That’s fine and easy enough, but it should make you nervous. What if, contrary to our assumption, Refract() was actually returning false fairly frequently? That’d mean there was a bug somewhere, but we just obscured it by handling the total internal reflection case here.

CHECK_RARE takes a maximum allowed frequency and a condition that shouldn’t happen very often. During program execution, it tracks how frequently the condition is true. Then, when the renderer exits, if the condition was true too often—a statistically significant fraction of the time more than the given frequency—an error is issued. At that point, we know something’s fishy and can start digging in.

(Here’s what’s going on with the do while(0), if that idiom isn’t familiar.)

That obviously doesn’t work; not only will there be race conditions when we run multi-threaded, there’s no way to check the accumulated counts at the end of program execution. Here’s a full CHECK_RARE implementation that handles that and more. It’s a little tricky, but we’ll discuss all the bits of it below.

First, the static_asserts: when I use CHECK_RARE I can never remember what the order of parameters is, so those at least give useful compile-time error messages when I get them wrong.

Next, the number of times the condition is checked and the number of times it’s true are stored in thread_local variables. Naturally we’re running multi-threaded here, and we don’t want to pay the cache-coherency cost of using std::atomic variables for these counters; that’d be catastrophic for performance. It’s much more efficient for each thread to keep its own counts for now.

Then, there’s a funny little trick to be able to accumulate those thread-local values when we want to sum them up at the end of program execution: static StatRegisterer. Because it’s a static variable, the StatRegisterer constructor will be run exactly one time, by whichever thread gets there first. The StatRegisterer class just holds on to all of the lambda functions its given; here’s its implementation in pbrt-v3.

At the end of program execution, when we want to sum the counts, the thread pool has a function that will run a given callback in each active thread—it basically schedules a number of jobs equal to the number of threads and includes a barrier in the jobs to ensure that each thread only runs one job. We set things up so that each thread runs all of the lambdas provided to the StatRegisterer; in turn, those add all of the thread’s local values to the global sums stored in the RareSums map.

What counts as failure?

Given the accumulated count of times that the condition was true and the total number of times it was checked, the last thing is to decide if we’ve found a statistically-significant result: for example, if an instance of CHECK_RARE is called only once and the condition is true for that one time, that doesn’t really tell us anything useful.

One way to formalize what’s going on here is as a Bernoulli process; we’ve got samples from an underlying process that can take on two conditions (true or false) with unknown probabilities. The maximum likelihood estimator \(\hat{\theta}\) of the probability of the condition being true is just the number of times the condition was true divided by the total number of samples, and the sample variance is \((\hat{\theta} (1 - \hat{\theta}))/(n-1)\).

These are easy enough to compute:

I ended up deciding that two standard deviations was a reasonable confidence level to require before reporting a failure. In practice, the CHECK_RAREs in pbrt run frequently enough to have very low estimated variance, so it’s not too fiddly about how many sigmas we require here.

And that’s it for CHECK_RARE; a pretty easy thing to implement in the end. It’s nice to have in the toolbox; I’ve found that as I work through pre-existing code that handles edge cases, it’s nice to leave a few CHECK_RAREs behind, just to be sure it’s all working as expected. They’ve found more than enough bugs along the way to be worth the little trouble.